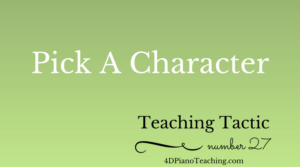 Thanks for stopping by for another Tuesday Teaching Tactic. Today our theme is “Pick A Character”. While many of my students do like classical music, they relate a lot easier to popular tunes including Broadway songs, Disney movie themes, pop music from the radio, or country music. Teenagers and children often know the artists behind the music from TV shows like The Voice or American Idol. And if it’s a movie or stage production, most of my students have seen those shows at least 1 or more times. When they they pick any song from these genres of music, my students know the stories or backgrounds so well. I’ve even had a very young student be obsessed with the Beatles and know everything about them thanks to her Dad’s love for them! This type of music seems to ignite a passion and interest in my students of all ages so easily!

So introducing classical music (whether it’s Baroque, Classical, Romantic or Contemporary), I often feel that lack of passion immediately from my students. We are all aware of the need to promote a love for this music since it’s disappearing from popular society and there are so many ways to do this. One of my favorite ways is to help students pick a character to hear within their classical music so they begin to listen and create sounds that show this character and what happens.

As we begin a piece, I ask students about the mood of the piece and who it reminds them of. Often they consider family members or friends and come up with a story to tell me. One favorite was a story about a sneaky little brother who made his way into the pantry to eat all of his favorite cookies! When his mother found him, it was quite a mess. When we applied this to the older brother’s piece, the image of his tiptoeing brother made his quiet staccatos so much more impactful!

For older students or teenagers, sometimes they prefer choosing a few descriptive words to characterize the piece. This is easier when the piece’s title tells you what the composer was imagining. But for those preludes, minuets, bouree’s, and such, just jump in and come up with your own word or “words” that describe the character in the piece. Sometimes I call it the student’s “Title” for the piece. An example was my high school student working on a Bach Invention last semester – she called it the “Never Ending Race” and it really got her in the spirit!

I hope you will take a moment to pick a character with at least one of your students this week. When they delve into the music, they really become so much more attached to it and able to express themselves better as they understand it better. Enjoy your Tuesday!

Whitney Hawker, NCTM, teaches group and private piano at Weber State University, Utah. She loves surprising students with the perfect piece or a new exciting game! After graduate school, she missed sharing ideas and resources daily with colleagues so she and her friend, Spring, began blogging together at 4DPianoTeaching.com