As I’ve been looking for composition games and resources, I came up with an idea for a new game for my studio. We usually compose with a theme (winter, cowboys/cowgirls,…) or a concept (use thirds, certain rhythms,…) when assigning a weekly “You the Composer” assignment. But with my older students playing more advanced repertoire that tells a story or develops the character through the music, I wanted to have a composition assignment that would reflect this idea as well. 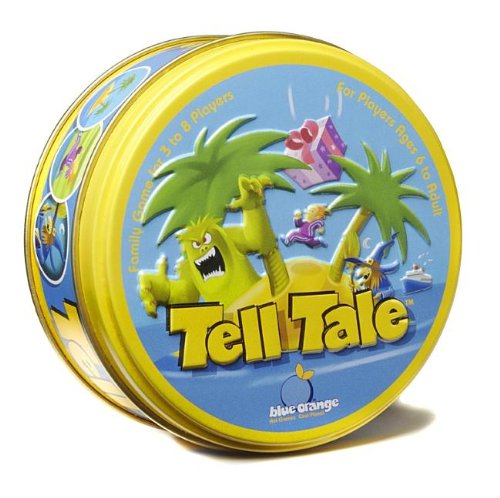 Enter the awesome “Tell Tale” game by Blue Orange. When I saw this and the fairy tale variation sold on Amazon with great reviews, I decided to try it. It arrived a few weeks ago and my students have been loving this game in piano lessons!

There are several ways to play with the cards that are included in the instructions inside the container. This game contains 60 round double sided cards with pictures included in this game. To begin, I have each student draw 3 to 4 cards. Then we make up a crazy story together, usually with lots of laughter. For example, one of the stories this week included a silly pig who learned how to drive a car down Route 66 and then worked on the car till it could fly across the ocean to take him to Hawaii where he lived happily ever after on the beach!

Next students come up with what each part of the story would sound like – would the car sputter? Would the road be bumpy and long or is the pig more like a race car driver? Then flying would sound different and what about the waves on the beach? Sometimes with younger students, I’ve jumped in to improvise an accompaniment in the lower octaves of the piano. Other older students have had fun improvising a story on their own! After our initial improv session, I encourage them to use this story or come up with another one that they can put into music to tell me next week. They’ve brought back the coolest pieces with dramatic narration or had me guess what happened in their story! Hope you enjoy this game as much as we have 🙂

Whitney Hawker, NCTM, teaches group and private piano at Weber State University, Utah. She loves surprising students with the perfect piece or a new exciting game! After graduate school, she missed sharing ideas and resources daily with colleagues so she and her friend, Spring, began blogging together at 4DPianoTeaching.com